The directors of Blain|Di Donna are delighted to announce their forthcoming exhibition, Jean Arp, A Collection of Wood Reliefs and Collages, on view November 1 through December 11, 2012. The core of this whimsical and colorful exhibition is a collection of 24 unique painted wood reliefs and collages by Jean Arp coming on public view for the first time in America.

This group of works demonstrates the importance of the interplay between form and color for Jean Arp, as well as the developmental nature of the works’ physicality—from the streamlined surfaces of his paper collages to the heightened sculptural dimensionality of the wood reliefs.

Arp and the print publisher Louis Broder collaborated on many projects and publications, beginning in 1957. Their most ambitious was an album published in 1966 titled Le Soleil recerlé (The Re-circled or Re-ringed Sun). Arp created the paper collages in this exhibition as a prerequisite for this publication’s prints and then created the unique painted wooden reliefs on view. Therefore, each medium informs the other directly, forging their interdependence; spatial tensions result from their oscillating relationship between flatness and depth, light and dark.

Arp’s process of metamorphosis is intrinsic to understanding this body of work as a whole. Chance essentially formed the starting point for the colored paper collages; Arp allowed each element to fall haphazardly, but then played with the layered forms, rearranging or reinventing the accidental composition to fulfil his aesthetic vision—indeed, of all the Dada artists, it was Arp who solely retained the use of chance as a creative process in art right up until his death.

His forms are amoebic, embryonic, and referential of natural organisms. The “moving oval,” so evident in these works, was the basic form that the artist referred to throughout his oeuvre, and which he never relinquished. The colors are vivid and joyous. Arp’s ambition was to harmonize man and nature and he used his art as a vehicle to achieve this. He aimed to create art as nature creates life, and his collages and reliefs employed a fittingly biomorphic vocabulary.

“The cycles of nature and of art—from collage to wooden form to print to painted form—are reconciled, as light and dark, sun and night are included in a redemptive circle of creative energy”, says Mary Ann Caws, Distinguished Professor of English, French and Comparative Literature at the Graduate School of the City University of New York; and author of the essay in the fully illustrated catalogue which accompanies the exhibition. 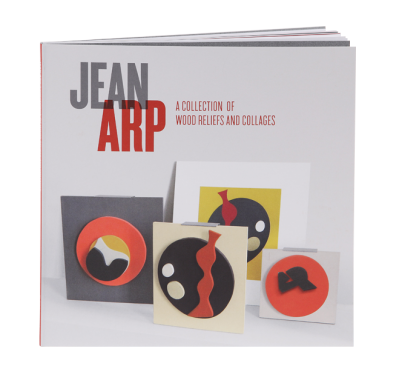