The directors of Blain|Di Donna are delighted to present their forthcoming exhibition of works by Paul Delvaux, bringing together over twenty oil paintings and watercolours on paper that date from the mid-1930s to the mid-1960s. Curated in close collaboration with the Paul Delvaux Foundation, this is the first exhibition of the artist’s work to be shown in the United States since 1969. It will be on view at Blain|Di Donna in New York from Tuesday, May 7, through Saturday, June 1, 2013.

This exhibition is comprised of loans directly from the Paul Delvaux Foundation, European museums and important private collections – with many of the works having never before travelled outside of Europe. The exhibition will travel to London where it will be on view from June 18 to July 17, 2013, comprising the first ever solo exhibition of Delvaux’s work in the United Kingdom. This is Blain|Di Donna’s fourth monographic exhibition dedicated to revisiting the oeuvre of a Surrealist master, being preceded by presentations of René Magritte, André Masson and Jean Arp.

Delvaux, like his compatriot René Magritte, was profoundly influenced by the enigmas proposed by Giorgio de Chirico’s earlier metaphysical works and the fantastical works of James Ensor. Although never directly associating himself with the Surrealist movement, but nonetheless deeply moved by the ideas of its  protagonists, Delvaux similarly set forth dreamlike compositions in his paintings. Throughout his life, Delvaux retained a strong respect for the Classical world and embraced it by curiously merging traditional Renaissance perspective, a rekindling of Ingres’s voluptuous nudes, Greek and Roman architecture and their subsequent ruins, with a modernized Belgium of street cars, suburban personages and whimsical characters from Jules Verne’s illustrated novels, thus creating a mysterious theatre of the absurd.

Delvaux’s paintings of the late-1930s are often set upon a constructed stage of strange and desolate landscapes; dramatic mountains rising into the distance, defined through strong contrasts of light and dark. In Le Récitant (1937), a seemingly hypnotised, half-undressed man points towards a painting within a painting, where a fertile green composition potent with symbols of female sexuality is juxtaposed against the surrounding arid environment, where another unclothed male figure wanders towards nothingness.

The masterpiece La Joie de vivre (1938), painted following the death of the artist’s father, depicts the male as a suited figure whose back is now turned away from the viewer. He casually embraces a woman whose nakedness and entwined grip is stark by comparison, the pale whiteness of her skin also contrasting with the deep midnight blue of the room’s interior. A lush, primeval forest rambles outside of the open window, occupied by another  naked woman who symbolically plays a lute to seduce her lover. Last shown in the United States over half a  century ago in 1959, this work is one of the exhibition’s major loans.

His works of the 1940s – while becoming more preoccupied with stylistic representation upon the picture plane and less concerned with perspective – continue to utilise the sensual language that characterised Delvaux’s work throughout his career. Surrounded by sumptuous silk and velvet fabrics, wide-eyed and voluptuous naked women assume reclined positions, suggesting a pictorial rhetoric of seduction and temptation. Studying architecture at the Académie Royale des Beaux-Arts in Brussels before becoming a painter, space and setting plays an important role within these works, as in the monumental L’Éloge de la mélancolie (1948), where a post-coital nude lies within the grand interior of a classically-designed home.

A fully illustrated catalogue will be produced to accompany the exhibition, which includes an essay by Anna  Swinbourne, an independent art historian and curator, decorated as Chevalier de L’Ordre de La Couronne by King Albert II of Belgium for the retrospective she organized on James Ensor at the Museum of Modern Art,  New York.

Artist biography:
Paul Delvaux (1897–1994) was a Belgian Surrealist painter born in Antheit in the province of Liège. His early studies in architecture at the Académie Royale des Beaux-Arts de Belgique left an indelible impression upon his paintings, where figures often populate urban settings within a traditional perspectival space.  Delvaux’s oeuvre consists primarily of repeating female nudes, suited men, trains and street cars, set in the everyday life of Belgian suburbia or mysterious classical ruins. In 1965 he was named director of the Académie Royale de Belgique. Important exhibitions during his lifetime include both the 1948, 1954 and 1968 Venice Biennials and major retrospectives in 1973 in the Boijmans Van Beuningen Museum in Rotterdam, and then in 1997 at the Musée Royaux des Beaux-Arts de Belgique. 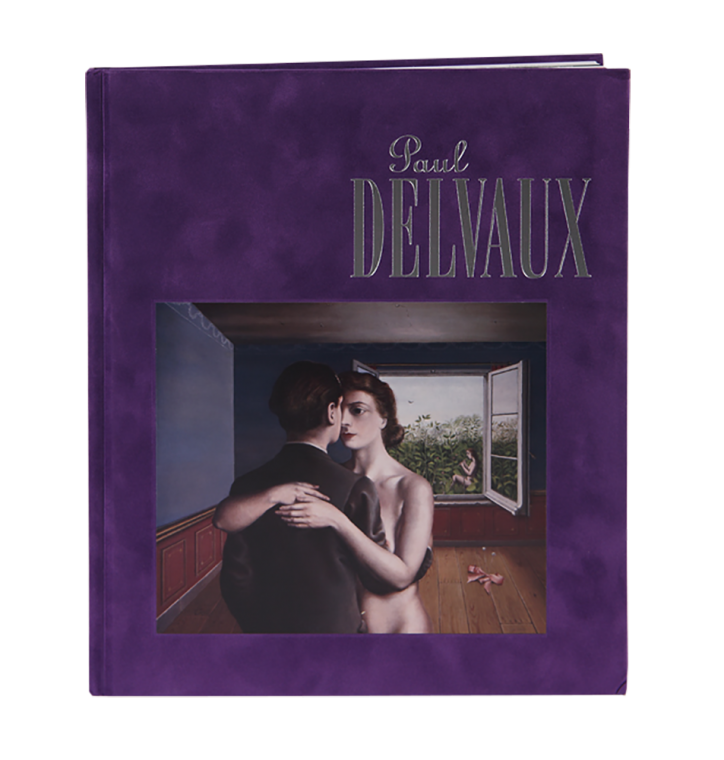